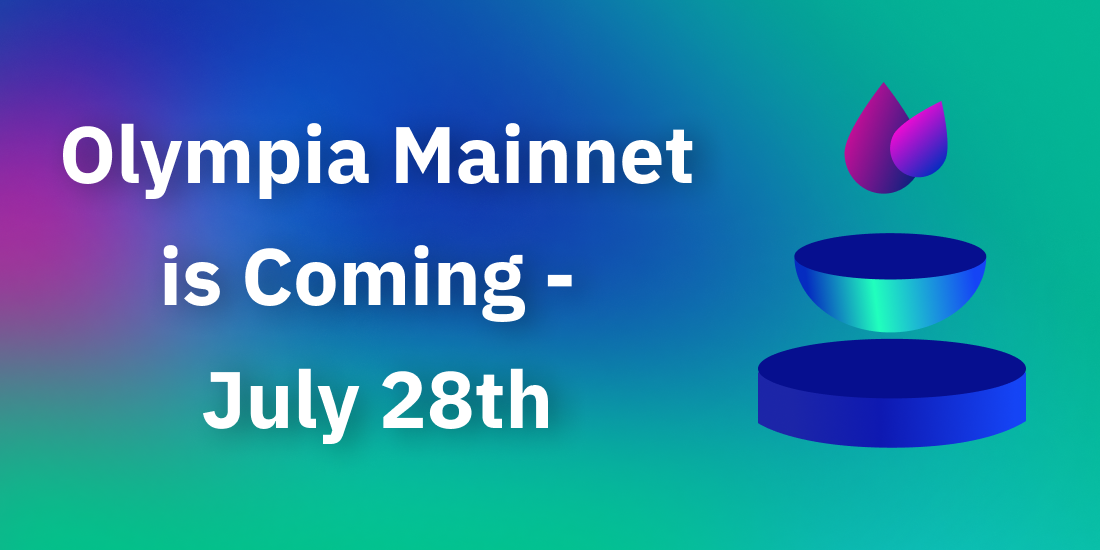 Updated June 27th: The launch of the Olympia mainnet has been moved from June 30th to July 28th. Core network testing is complete, however, going live on June 30th would leave too many bad tradeoffs around user experience and user security in some auxiliary services. Olympia will go live on July 28th to provide time to work on hardware wallet support, and refine Instapass and Instabridge. Full announcement can be found here.

Olympia is the first iteration of the Radix Public Network, commonly referred to as "mainnet". Olympia will implement the foundational technologies that serve as the basis for all future Radix releases, and allow our community to start taking advantage of the most fundamental Radix features.

Importantly, Olympia will mark the genesis of the Radix ledger and the Radix native XRD token that will be maintained through all future updates to the Radix Public Network. Although eXRD (the ERC-20 representation of XRD on Ethereum) will continue to exist as a permanent link between Radix and the Ethereum network, holders of eXRD will be able to swap them 1:1 to acquire XRD. This can be done via the upcoming Instabridge service, which we will be releasing details on later this week, or on exchanges that support XRD, such as Bitfinex.

XRD will be used to pay transaction fees, which are then burned. Holders of XRD will also be able to help secure the network by staking their XRD tokens in Radix’s delegated proof of stake (dPOS) system – and receive newly emitted XRD tokens as an incentive. Staking is one of the most critical things that you, as a community member, can do to secure the Radix network and ensure its continued decentralization. We will be releasing details on how staking will work on Olympia in the upcoming Radix Staking and Incentive Rewards Guide.

So what is included in Olympia?

As will be the case with all future iterations of Radix, Olympia can be broken down into two software layers: an “application layer”, which defines what can and can’t be done on the ledger, and a “consensus layer”, which defines how nodes connect to each other to come to consensus on the ledger. The two work hand in hand to deliver the functionality of Radix. Without one, the other is meaningless. Together, they become something incredibly powerful.

The application layer of Olympia is the Radix Engine v1. For v1, functionality for users and developers is limited to token issuance and usage, and staking. It will not include the DeFi programmability described in the Radix DeFi Whitepaper. These will come in the Alexandria and Babylon releases.

The token features included in Radix Engine v1, however, are easy to use and lay the groundwork for the programmability that will come later (with Radix Engine v2). On Olympia, new types of tokens can be created, named, minted, burned, and transacted by developers via simple API calls. Although developers will not yet have “smart contract” style programmability, they can easily launch simple tokens that can be accessed and used in exactly the same way as XRD (other than XRD’s special uses for network fee payment and staking).

Tokens on Olympia use essentially a very simple form of a token “Blueprint” in our future Blueprint Catalog concept, where common features will be accessible without writing or deploying special code. Under the hood, tokens are represented in a more “asset-oriented” way, where they naturally act more like dollars in your wallet, rather than as lists of balances that must be carefully managed in a smart contract.

This unique, asset-oriented approach underpins the new and more intuitively secure form of smart contract capability that Radix will introduce in Alexandria, and that will be deployable on-ledger in Babylon. Our form of smart contracts, called Components and template-like Blueprints, will allow developers to quickly develop powerful and secure DeFi functionality that is also modular and reusable. More information on Radix Engine v2, Components, and our Scrypto language that will be used to build them is coming later this year.

Beneath the application layer is the consensus layer, which defines how secure, scalable, and decentralized the network is. Olympia’s consensus layer will be a simplified, unsharded version of our Cerberus consensus protocol. Launching with this version of Cerberus allows for the safe and methodical refinement of our cutting-edge technology in a real-world setting.

Olympia’s consensus will use a fixed-size “validator set” of 100 nodes that is continuously selected and updated through dPOS staking by XRD token holders. Even without sharding, Olympia will deliver low-fee transactions with sub 5-second finality and a minimum throughput of 50 transactions per second (tps), eclipsing Ethereum’s 15 tps. This equates to a fully decentralized network without compromise, providing months of real-world proof of core network and consensus mechanisms. This will allow our ecosystem to develop while the remainder of the full, revolutionary Cerberus design - with linear scalability and on-demand cross-shard atomic consensus - is being built and tested.

With this foundation of Cerberus in place, we will be well-equipped to continue the rollout of our more advanced Radix Engine features in the Alexandria and Babylon releases. Once developers begin building and deploying great DeFi applications in the Radix Ecosystem, the fully-sharded iteration of Cerberus will provide unlimited, frictionless scaling of DeFi in the Xi’an release and beyond.

What Is Being Delivered for Olympia?

Three discrete pieces of software are being delivered as part of the launch of the Olympia mainnet.

Radix Desktop Wallet - a secure standalone wallet app that the Radix community may use to easily hold and transact tokens – including XRD and any third-party tokens created on Radix. It also makes it easy for anyone to stake and unstake XRD to Radix validators, and claim incentive emissions. It will be available on Windows, Mac, and Linux. Ledger Nano S hardware wallet integration will also be provided.

Radix Explorer - A website that allows anyone to view the state of the ledger, such as details of addresses, transactions, token types, and validator nodes. It also provides a list of all nodes that have registered to be a validator node and are available for staking, along with information about each one to help guide choices of which validators to stake to.

Radix Node - An implementation of the core protocol of the Radix Public Network, including Radix Engine v1 and unsharded Cerberus consensus. Anyone may install the node and configure it as a full node, validator node, or archive node depending on intended usage.

All software is open source and available to view on Github. Further information on each of these pieces of software, including guides, will be available in the coming weeks.

With the launch of Olympia, the Radix community can now take their first steps into the Radix Public Network. Delivering the XRD token and the first iterations of the Radix Engine and Cerberus consensus algorithm, Olympia will serve as the robust, decentralized foundation on which the rest of Radix’s roadmap to become the first layer-1 protocol for DeFi will be built.

Olympia will focus on tokens, creating the native XRD token as part of the launch. It will also provide developers with the tools to create their own tokens, supported by an unsharded version of our Cerberus consensus with quick finality and decentralized delegated proof of stake protections.

The goal for Olympia is to establish our core technologies and prove their stability before rolling out the more complex features of Radix. In this way, we can minimize risk for our community and prepare for the next releases that will build a secure, decentralized future for finance.

There will be more news coming as we approach the Olympia Mainnet release on July 28th, 2021. Stay tuned to the official Radix social and community channels below for updates and sign up for our newsletter here.
‍

The below articles give more information on the approaching Olympia Mainnet.

To stay up to date or learn more about Radix, please follow the links below.‍