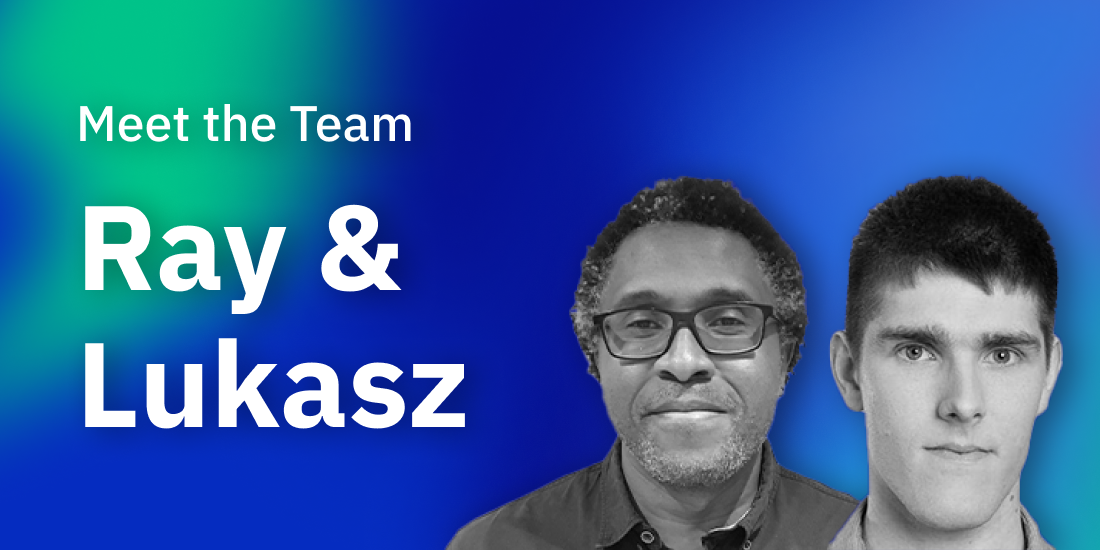 How do you go about building the first layer-one protocol specifically built to serve DeFi? By choosing the right people to help build it.

In this “Meet the Team” blog series,  we showcase two Radix DLT team members at a time (Check out the previous post with Ben & Mikael) so you can learn more about the people working on making the Radix vision a reality.

Today we caught up with Ray and Lukasz to discuss their professional background, their roles, and importantly, what gets them so hyped about Radix.

Ray has been a Java developer since way back when Java was at version 1.0. He dabbled in Javascript and Python along the way, working for companies such as Oracle, Vodafone, British Telecom, and the John Lewis Partnership, covering both front and back end development, and filling in the documentation that developers occasionally miss. He realized that he enjoyed the writing side (both technical and creative) so he did more of it until he was eventually writing, more or less, full-time.

‍We asked Ray a little more about his role below:

I think Radix has been around long enough to have shaken the ‘start-up’ moniker, but still maintains the same energy and innovative drive. Roles are not set in stone, so everyone dives in to help wherever they can, which is a good way of gaining experience in areas that you’d probably never come across in your chosen field. There are great opportunities to learn here: reactive programming, the Rust language, documentation pipelines … and of course, decentralized finance.

I’ve always been attracted to working with new paradigms and technology, and this is a good opportunity to work on the cusp of a financial revolution. They don’t come along that often.

The bulk of my day-to-day work is documentation. This covers the APIs, the Scrypto programming language (more on that soon!), and aspects of the network. I’m also building our documentation publishing pipeline with the aim of getting up-to-date information out to our users as quickly as possible.

I think that DeFi will evolve in the next few years to become mainstream; people will look at buying cryptocurrency in much the same way as buying traditional assets. At the moment, it’s still a domain for the brave-hearted, but one of Radix’s key aims is to simplify and add a layer of safety to decentralized finance, which in turn will make it available to more developers, and following on from that, more users and customers.

Lukasz’s professional career started in 2013 when he joined a microfinance company for an open source project as a junior Java developer. For the past few years before joining Radix he was primarily a Scala developer. In 2016, he joined IOHK to work on an Ethereum implementation that their team was to build from scratch in Scala. He then left the industry to work on a workflow processing system, just to come back to the crypto a year later, right here as a developer at Radix.

‍We asked Lukasz a little more about his role below:

I first came across the Ethereum yellow paper in 2016 and this is where my crypto journey started. I was always more interested in the tech side of the industry, rather than investment, although I did take part in that too. The same year I joined the Grothendieck team at IOHK, where we built an Ethereum (Classic) node implementation in Scala. The industry since then has changed a lot. After the initial phase of excitement with all the new possibilities with smart contracts, we now realize that there’s still much to do to achieve long-term sustainability. The real fun is just getting started - which brings me to Radix.

Radix is a truly innovative platform that will play a central role in the DeFi world. With its scalability and ease of use it will make financial (and other) apps way more available and cheaper to use for everyone. I’m particularly excited about the technical innovations of the project: the Cerberus consensus mechanism, the Radix Engine (V2) and everything else.

My primary role is senior backend developer for the Radix node. Our main goal is to deliver a solid product for the Radix Betanet release. My responsibilities lately have been around the consensus and p2p sync parts of the application. Nodes sometimes run out of sync for various reasons (network problems, temporary shutdown) and being able to sync them back up is a crucial part of the application. Without this, the network would quickly stall. It’s especially important for the non-validator “full nodes”. As they don’t participate in the main consensus protocol, sync is the only mechanism that keeps those nodes up to date. Even though the node is not a validator, it still needs to verify that the sync data it receives is correct.

In my opinion, Radix is a truly great place to work at with a decent level of developer independence (and the responsibility that comes with it!).

Everyone working on Radix is pleased to call both Ray and Lukasz colleagues. If you are interested in joining Radix, make sure to check our careers page, where we have multiple positions currently open: https://www.radixdlt.com/careers/.