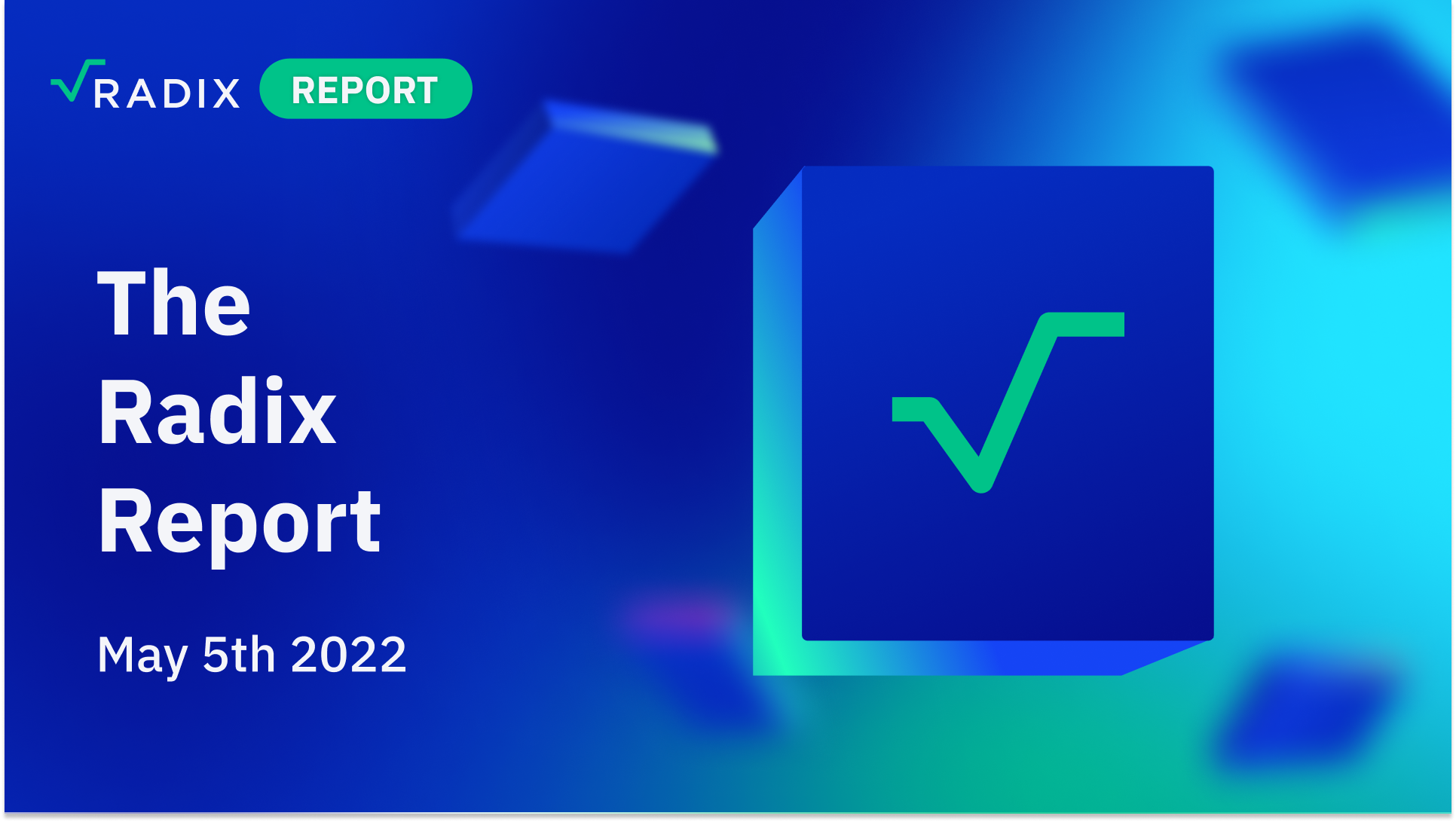 Multi-platinum selling singer, songwriter, and producer RedFoo of LMFAO is going to do a Scrypto hackathon at his house in Malibu California in just over 1 month!

Not only that: you (yes you) can apply to be part of the FooCrew and come and stay for 3 days at the Party Rock Rauch, and hack some epic dApps together with the legend himself.

More details can be found here, be sure to check it out.

If you are wondering how RedFoo even came to fall in love with coding and Radix, you can learn more in an interview I am doing on my podcast with him on the DeFi Download, out this Friday.

If you haven’t already subscribed, firstly, I am mortally offended (no, not really, but we do have some awesome guests, so you should definitely tune in), and secondly here are the links to get it on your favorite podcast catcher:

On the general crypto universe side of things, the scalability debate continues to rage on with Yuga Labs (the creators behind Bored Apes and ApeCoin) experiencing some serious congestion issues on Ethereum and are now looking at creating their own layer 1 protocol.

Unfortunately, that is unlikely to solve their issues if they stick to the EVM (Ethereum Virtual Machine) and Solidity. Looking under the hood of Radix reveals one of the secret weapons of the Radix Engine - it is really, really scalable for things like minting NFTs, or basically anything that is more complex than just a simple transaction (which is basically the whole of DeFi and Web 3.0).

To find out more about what I am talking about and why the Radix Engine is even cooler than you realized, jump into this thread.

If you haven’t had a chance to digest Marketing Wen-sday Shard #3, I’d recommend you take a look at it. That will give you a good handle on what’s going on marketing-wise, but of course, we’re not slowing down. One of my mottoes is: Never Stop Marketing.

Last week, we announced the next Radix Chess tournament.  What I love about this is it’s not only fun, interactive, and will help drive awareness, but it’s very much on brand.  Radix is a community of thoughtful and intentional people.  That’s what we are about and we will succeed or fail with that approach. I like to say that our brand tone is “we’re serious about DeFi, but we don’t take ourselves too seriously.” The event will be co promoted and streamed live by Lichess.org, along Twitch streamers Finochetta, Penguingm1, and on YouTube in Spanish by Ajedrez Guerrero. You can register to play with the pros here.

In terms of being serious about DeFi, we’re serious about helping people get educated on the fundamental flaws inherent in the EVM/message-oriented model of DeFi and how the Radix Engine changes that game, which is why it’s been so rewarding to see the uptake that the “Rekt Retweet” series has been receiving. In fact, as of this writing, Rekt Retweets have nearly 800 likes, which is quite impressive. Take a moment and share it with your network.

Between the Rekt Retweet series and our new “Why DeFi Devs Love Scrypto” posts, we’re seeing some nice growth in our community properties.  Not only is our Twitter follower count over 150k, but we hit 20k in Telegram. What’s more, Piers got a nice note from a deep Crypto OG who forwarded an internal note from one of his research teams.

‍
"I've got the feeling they [Radix] are really doing the job on both the tech and business sides. The telegram community is also awesome, they don't do sh*t posting like in 90% of the projects out there."

Big shout out to Jacob, Farah, and Kevin, for driving such an inspiring atmosphere.

I’m writing this report on the train back from New York City where I just attended the Radix Revelation MeetUp-Brooklyn and it was AWESOME and in a funky place with, shall we say, some unique flair.  There was a  ton of great energy.  We had 25 people there and the vibe was fantastic. Big shout out to Eli and Steffan for making it happen.  I’m excited to be attending additional meet-ups in Montreal, Helsinki, Barcelona, and Tel Aviv this month as well.

And before I sign off, let’s not forget the upcoming FooHack with world-famous musician, RedFoo as the host, the upcoming takeover of the Brave homepage on May 10th, and, looking a bit further out, Radix at Consensus in Austin in June (post coming on that next week).

In short, a lot of good activity going on, and thank you for your support.

The big news from the tech side of the shop is that we successfully released Scrypto v0.4 on schedule, which enables an early form of frontend development and incorporates our shiny new authorization model; be sure to read about it here if you haven’t already.  Our goal from this point forward is for future Scrypto releases to be more additive in nature, rather than revamping existing systems.  In other words, developers can expect that porting their code from release to release will start being a trivial process.

While on the topic of Scrypto, we have just started a new community challenge centered around a staple piece of DeFi infrastructure - oracles!  Submissions to our previous DEX challenge were tremendously high quality, and we hope to see the same again.

We have completed the design of a system for removing validators who miss too many rounds of consensus, allowing them to take the time they need to resolve their issues without slowing the network down unnecessarily.  Implementation of this design on Olympia is now being scheduled, and we’ll write up the particulars of how it works soon.

Finally, the long-awaited coordinated forking release for Olympia is in the last phases of testing and is expected to release within the next couple of weeks.

Update provided by members of the Radix community*

*Updates provided by members of the Radix community