Legendary Musician RedFoo Teams Up with Radix to Host “FooHack” 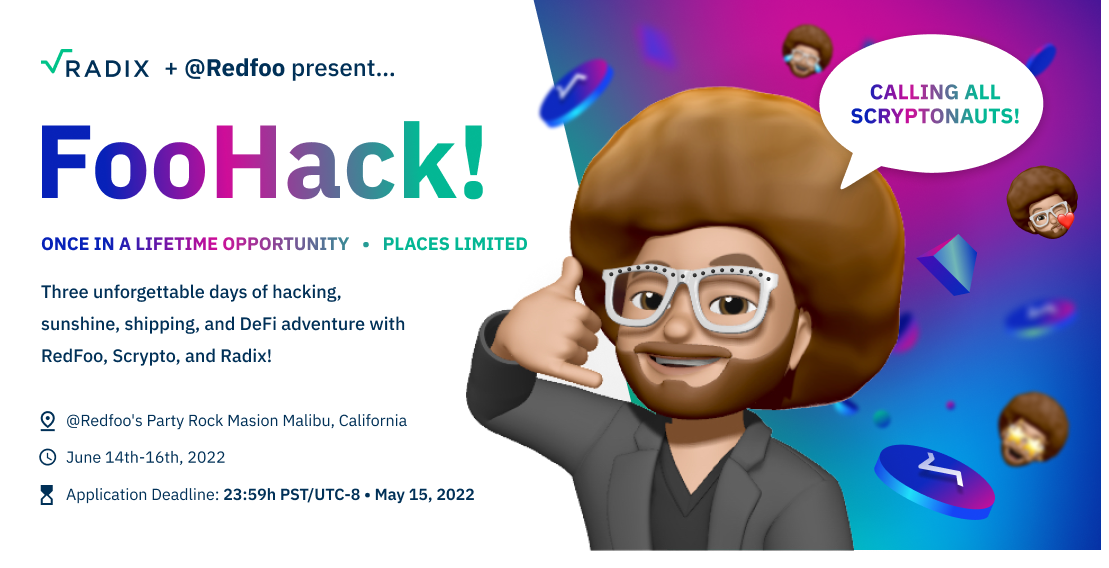 Ok, so you may have known that, but what you probably didn’t know was that RedFoo is both a coder and a Radvocate. Some of his journey is explained below and it is why we’re excited to be working with him for FooHack.

Even more, we’re excited that 4 lucky members of the Radix Developer Community will be able to join us there.

Approximately five years ago, RedFoo discovered computer programming as another way to express his creative talent. Like music, it provides him with a language to manifest himself in the world.

Since then, he has become quite a “student of the game,” demonstrating fairly convincingly that someone who didn’t grow up as a developer can become empowered by learning how to code. As he said,

Ever since, he has developed a voracious appetite to “surround [himself] with the future” because of his growing awareness of the “accelerating technology” and the “massive transition” that the world is going through.

He immediately recognized the potential for this new paradigm to redefine power structures, particularly for those who decide that they’d like to take advantage of this massive opportunity to create useful stuff for others and wealth for themselves.

Since this epiphany, he has dedicated himself to becoming a “builder,” a “student of building” and a “supporter of other builders.”

RedFoo Has a Radix Revelation

RedFoo met the Radix team at SXSW in Austin in March, 2022.

Since he has studied multiple computer programming languages like C, C# and Swift, he immediately appreciated that the asset-oriented approach of Scrypto will be an enormous force-multiplier for developers building decentralized applications.

“Money may not grow on trees, but it might grow on binary trees.”

Radix’s vision is a radically better financial system, and we’re on a mission to provide builders with everything they need to help create that and this time, we’re doing it with an extra touch of flair. You could even say that it will be a “radically different” hackathon.

For 3 days (June 14-16, 2022), 4 fortunate members of the Radix developer community will get to participate in a hackathon at the Party Rock Ranch in California – this means you!

Alongside RedFoo and members of the RDX Works team, you’re going to build some epic cool stuff.

If you’re fortunate enough to be selected to be part of the FooCrew, here’s what you can expect…

What Happens at the Foohack hosted by RedFoo?

First off, RDX will pay for your travel to/from the hackathon and accommodation while you are there.* Meals will be provided.

You should be able to fly/get to the event on June 13th and depart on June 17th.

Once you’re there, you’ll spend 3 awesome days, guided by members of the RDX Works team and working alongside RedFoo to build a real live dApp.

The whole time, you’ll hang out with members of the RDX Works team, RedFoo, and get to experience the Party Rock Ranch, something most people never get to do. Boom!

Ready for the FooHack adventure?

What is the target hackathon dApp?

Since RedFoo was young he has always been a massive fan of Chess. He spent his teenage years and early twenties fully honing his technique to the point where he is a killer speed chess player in his own right.

The starting point will be a chess engine that RedFoo has been working on implementing in Rust especially for the hackathon. From here, the Foo Crew and RedFoo will start working the dApp magic.

Ready to Join the FooCrew?

Fill out this form.

We will select 2 frontend-focused and 2 backend-focused developers to attend the Hackathon.

When/Where is the Hackathon?

What are the expectations?

You’ll behave, contribute, and have fun. In other words, don’t be an arse and be excellent to one another.

What will be covered?

What are the Selection Criteria and Timeline?

By participating in the Hackathon, you agree to be filmed during the event, and give RDX Works the image rights for that filming in perpetuity.

*certain restrictions will apply. For example, your flights won’t be first-class. Nor will you have your own plane.