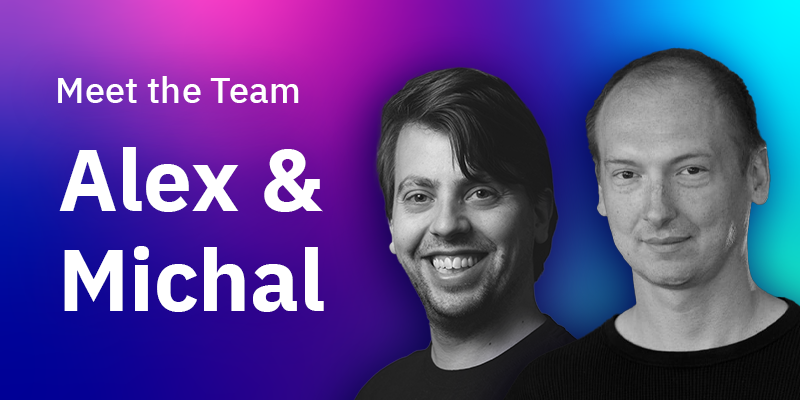 With the Radix Olympia Mainnet launch quickly approaching, the Radix team is hard at work putting the final touches on the first iteration of the Radix Public Network.

This Herculean task is made possible by the amazing team building Radix. This blog series gives you the chance to learn a little bit more about the people who are making the Radix vision a reality. In the previous post, we introduced Theo & Shambu. This week, we had the pleasure of catching up with Alex and Michal.

Alex has been working within the crypto space for the last couple of years, developing wallets, SDKs, and elliptic-curve, cryptography-oriented code in general. Before that, Alex worked within mobile app development for ten years, primarily focusing on iOS apps.

Alex is a polyglot programmer driven by aesthetics in user interfaces as well as the source code itself. What attracted him to working in crypto is how it combines the two things he loves most: Mathematics and FinTech.

Alex joined Radix DLT at the beginning of 2019 as a developer. He has since worn many hats, contributing to almost every single code project we have at Radix.

We asked Alex a little more about his role below:

I am definitely the developer who has the most challenging time answering that question, as it has changed so much. Radix DLT originally hired me to develop an iOS wallet, which required developing a Swift middleware library that occupied me for most of 2019. For various reasons out of the scope of this article, we delayed the development of an iOS app.

So, at the end of 2019, I joined our research team to work on modeling. Mostly in Swift, but a bit of Python as well. A couple of months later, I joined the core team and mainly focused on further developing our crypto toolbox in Java. Around the summer of 2020, I started developing our Ledger Nano S application. Then, just before Christmas, I started working on a new version of our JavaScript middleware library, which occupied me until a couple of weeks ago. Since then, I have been working on our Ledger Nano S application again, which is my primary focus right now.

While not explicitly stated anywhere in my list of responsibilities, I try to raise the bar when it comes to code quality and testability. Cross-language correctness assertion and compatibility checks are something I feel strongly about. Code duplication is something that makes me cringe.

Today, I’m most psyched about the Radix development environment: Scrypto. Not sure what I’m allowed to disclose publicly on the matter, but it is really exciting and will revolutionize the entire industry!

Working at Radix is different from anywhere else I’ve worked. You have an extreme amount of freedom and an equal amount of responsibility. This might not suit everyone, but it fits perfectly with my personality. I can work almost any hours I like, doing less on some days and catching up on others. This flexibility really suits me and makes life as a parent easier too!

My colleagues trust that I will get the job done in a satisfactory and timely manner. We are all treated like responsible adults, as opposed to some companies checking that their employees be present 9 to 5.  No one tells me what to do or how to do it. Instead, I propose what to do and how to do it and get feedback from my clever colleagues and possible suggestions for improvement. This requires all of us to be driven, to take initiative, and to keep several balls in the air. Strong communication is also crucial, flagging things to the relevant stakeholders quickly if you’ve encountered any difficulties.

Over the years, Michal has had the pleasure to work with and learn from some great developers and designers. About a decade ago, he stayed in the Bay Area, where he took part in building a 300M user instant chat application. This taught him how to build horizontally scalable systems. Later on, he moved to a company running a Real-Time Bidding platform for ads, where he was exposed to vertical performance optimizations.

Prior to Radix, Michal worked for Aeternity blockchain. He and the team designed and implemented the protocol from scratch in Erlang language, which he says was a great learning experience. In addition, being exposed to the blockchain community let him understand the industry and its trade-offs.

We asked Michal a little more about his role below:

I have just joined Radix this spring, so I am still ramping up. My role is to take care of the consensus mechanism. This is the hands-on part. I look forward to maintaining and evolving the BFT variant that Radix uses.

Consensus itself has been a passion of mine for a while. The field changed significantly with blockchain platforms that are operated by untrusted participants. Working with consensus for me started with the NoSQL design movement, which answered scalability problems at newly popular cloud systems. New databases needed better mechanisms to answer failure. I worked a lot with Amazon Dynamo systems and messaging systems.

Consensus in blockchain is one level up and it is a bit of a misunderstood field. It not only takes care of the technical aspect of synchronizing data, but may also impact a product that it runs. We run a Proof of Stake system, which is very suitable for DeFi platforms, but Proof of Work will still play a significant role in the global blockchain ecosystem. The BFT systems are researched by many teams worldwide, and we witness constant evolution and improvement in security, liveness, and latency handling.

Radix is very focused on DeFi and this stood out to me when I first heard about it. The most exciting part was that Radix wants to build its scalability protocols to answer mainstream DeFi needs. It touches the consensus protocol and I didn’t want to miss the party! What also convinced me was the extent of the team’s domain knowledge in traditional finance. It’s a new level of DeFi when you know what you are doing in the Fi-part.

I think that trustless systems are game-changers for people, companies, and societies. Over the years, it turned out that many of the promises of Distributed Ledger Technology (DLT) would not happen as quickly as anticipated. But in theory, we could organize our lives in a better and safer way with DLT. Crypto applied to supply chain, finance, and auditing information has a bright future. Another way blockchains can change our lives is to answer challenges created by ads, tracking, and distractions.

The industry is very dynamic — even looking at the old giant that is Bitcoin, which should be the most stable of them all. From a digital currency aimed at spending, it changed to a store of value, and now it exists as a sort of bridge between the virtual and real world. Another angle is to look at the top 100 projects. The mixture of currencies, stable coins, utility coins, or startups shows how early we are and just how much potential there is.

Join the fight at Radix - The Layer 1 DeFi done right!

‍
For open positions, check out our careers page: https://www.radixdlt.com/careers