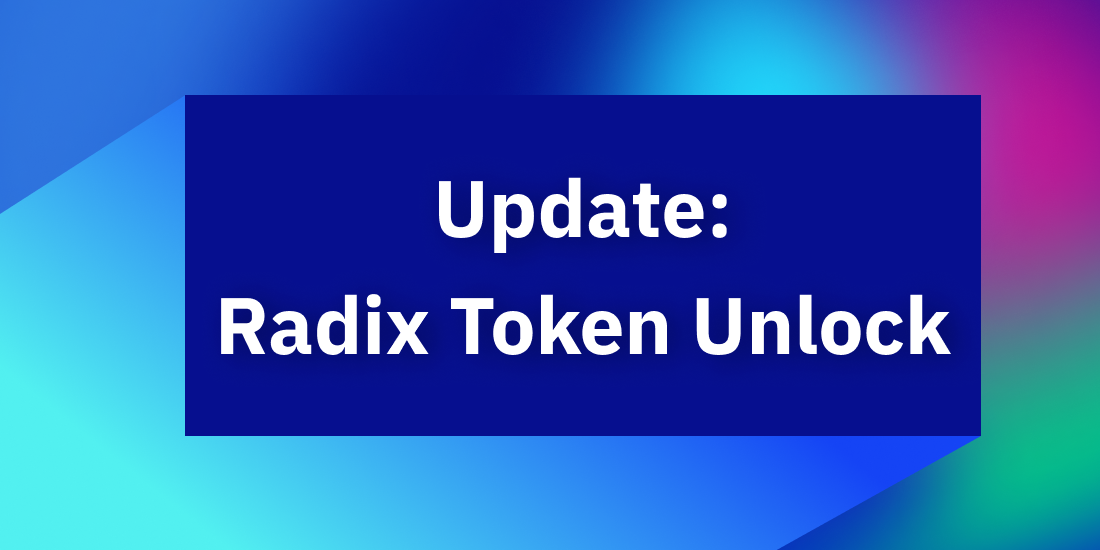 On August 20th, we put out an update that we were seeking opinions from the Radix community about a proposed change to the (e)XRD unlocking mechanism, with a simple survey asking if we should keep the current unlocking schedule that is linked to price milestones, or instead unlock all tokens immediately.

The first survey is now complete, and 66.8% of those who participated favored unlocking all tokens immediately. The second stage of the community survey, which is weighted by tokens, will be beginning shortly; however, from discussions with key community stakeholders and the results of the first survey, we expect this to also be in favor of unlocking all the tokens immediately.

Alongside the great participation in the first survey, it has been fantastic to see the debate and discussion occurring within the Radix community about this topic. As some of you have noticed, Radix team members have purposefully been staying out of the discussion, as we did not want to bias any results from the community survey. Now we have seen a large percentage of the community in favor of the change, we want to take this opportunity to explain our view and decision to undertake a community survey.

When price unlocking was originally introduced, we believed that having aligned incentives across token holders, the team, and the community would maximize awareness and distribution of (e)XRD tokens to increase the decentralization and security of the Radix Public Network before its inception with the Olympia Mainnet. With the eXRD token launch, we initially saw this working well with eXRD achieving high degrees of liquidity, a steady increase in token holders, and the total value of the network increasing steadily.

Being close to the launch of the Olympia mainnet, a decision was made to keep the system in place until after launch so as not to cause additional volatility during a sensitive period of the project’s long-term roadmap. We accept this did cause some frustration within the community, who felt this should have been discussed before the launch. Still, we felt it was essential to ensure the whole Radix community had the time to discuss and give their opinion on any proposed changes.

Given the fact that the network reached a total staked value of over $100m XRD within two weeks of the network staking going live, the Radix team fully backs a full unlocking as the best way to quickly reach the highest level of decentralization and security on the network within the shortest possible time.

We are confident that after the great level of discussion and sentiment shown in the community in the last few weeks, the second stage of the unlock survey (token weighted) will have a similar or greater result in favor of unlocking all tokens immediately. Therefore, we are beginning to put in place the things needed to facilitate this. In the unlikely event that the second survey is firmly against a change, we can re-evaluate the next steps.

Assuming this second survey favors unlocking the tokens, we are proposing all (e)XRD tokens will be unlocked on September 15th, 2021. This date has been chosen as it gives ample opportunity for us to prepare for the unlock and those who currently have staked XRD to unstake should they wish to.

We are also in the process of preparing marketing campaigns around this unlock, as it represents an excellent opportunity to significantly increase the awareness and distribution of (e)XRD to a broader audience. We hope many of the passionate and vocal members of the Radix community who have participated in this discussion will also help spread the word and aid with this awareness campaign.

The #unlocking-debate channel on the Radix Discord server will continue to remain active until at least September 15th to continue the discussion on this topic and help the Radix community coordinate how to leverage this event for maximum awareness and growth of Radix.