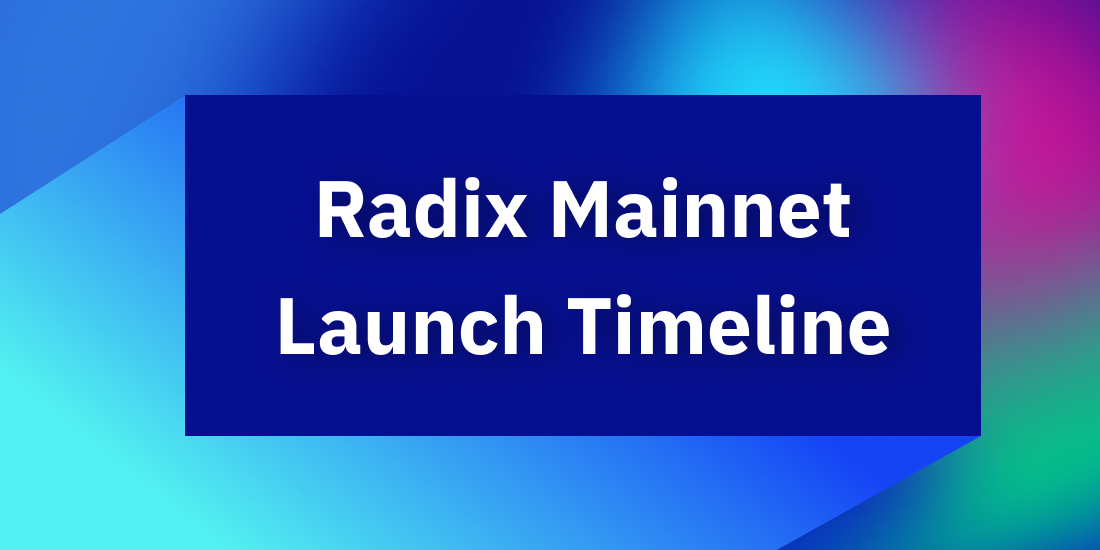 June 30 will mark the release of the Radix Public Network – a fully decentralized ledger network and the true Radix “mainnet”. The first release of this network is called Olympia, and future releases will maintain the same ledger; all transactions and tokens will remain immutable forever.

The launch of the Radix network is called its “Genesis”, and the Radix network protocol defines a special Genesis process to ensure a smooth network launch. This post explains what you can expect, and how you can participate in the Radix Genesis – either as an XRD token holder (or eXRD holder currently on Ethereum), or as a prospective node-runner on the Radix network.

TLDR for stakers and node-runners: The launch of mainnet will include a special 2 week bootstrapping period for everyone to fairly start swapping eXRD for XRD, staking, connecting nodes, and registering validators. During this period, everyone will be equally “first in line” – nothing special you need to do to prepare for the moment of launch.

Here’s a quick visual breakdown of how Radix Genesis will happen:

Radix Epochs and the Bootstrapping Epoch

Time on the Radix network isn’t marked in hours or days, but in what are called epochs. An epoch on the Radix network is a fixed number of consensus rounds, with each consensus round happening as quickly as network conditions allow. At the end of each epoch, the network does all sorts of things like update the validator set based on latest stakes, create emissions XRD for stakers and node-runners, and more.

Because Radix consensus rounds don’t take a fixed amount of real-world “wall clock” time, it’s impossible to say exactly how long an epoch will be – but we can estimate: Epochs on the Radix network are expected to be roughly 1-2 hours long, depending on how fast the network is running.

The very first epoch after Radix Genesis, however, is a special epoch that we call the bootstrapping epoch. It operates by different rules to ensure a smooth network startup – and it is defined to be a much longer period of time, roughly 2 weeks in length.

This 2-week bootstrapping period is very important to provide everyone with enough time to fairly get ready to participate in the Radix network from epoch 2 onward. It means that there is nothing special you have to do to prepare for launch, and that there will be no rush or unfair advantage to anyone just because they moved a little more quickly.

Here are the basics of what the 2-week bootstrapping epoch means to you:

What to do as an eXRD Token Holder

If you are currently a holder of the eXRD token on the Ethereum network, what’s on your mind is probably swapping eXRD for XRD on the Radix network, and staking that XRD to take part in emissions incentive rewards.

In fact, we might even recommend delaying your first staking decisions until late in the bootstrapping epoch. This means that you will see more validator nodes that have registered during this period, and have time to make good selections about who you want to choose.

What to do as a Radix Node-runner

You may also be interested in connecting a physical node to the Radix network. Configuring a node as a validator node may be of particular interest as it opens the potential to receive additional emissions rewards.

Note: Radix Olympia has a validator set of fixed size of 100, so we expect validator node-running to be for a few with high technical savvy and Radix familiarity; most people seeking to participate in staking rewards need not run a node and should just see the section above for XRD Token Holders.

Launching a decentralized network presents a chicken-egg problem: what validator nodes will initially operate the network and allow additional nodes to register as validators? This is one of the main reasons for the first bootstrapping epoch.

To solve this, the Genesis Transaction (the initial definition of the state of the Radix network) will be preconfigured with a limited validator set made of nodes run by Radix Tokens Jersey Limited (RTJL). These are bootstrapping nodes that will ensure that transactions are quickly processed during Epoch 1. This will include transactions of users receiving XRD, staking XRD to validators, and node-runners registering their nodes as potential validators.

No need to pre-register your node in any way, or rush to connect it in the first hour. You can take the 2 week period to connect, ensure you are set up for good stable participation, and promote your node to the community of stakers.

At the start of Epoch 2, the network transitions to normal epoch operation. The protocol will select a decentralized validator set for Epoch 2 based solely on the “top 100” nodes by stake delegated during Epoch 1.

Note: RTJL may stake some of its own tokens to its nodes, and others (within its staking policies), but will be on entirely equal footing with staking done by members of the community.