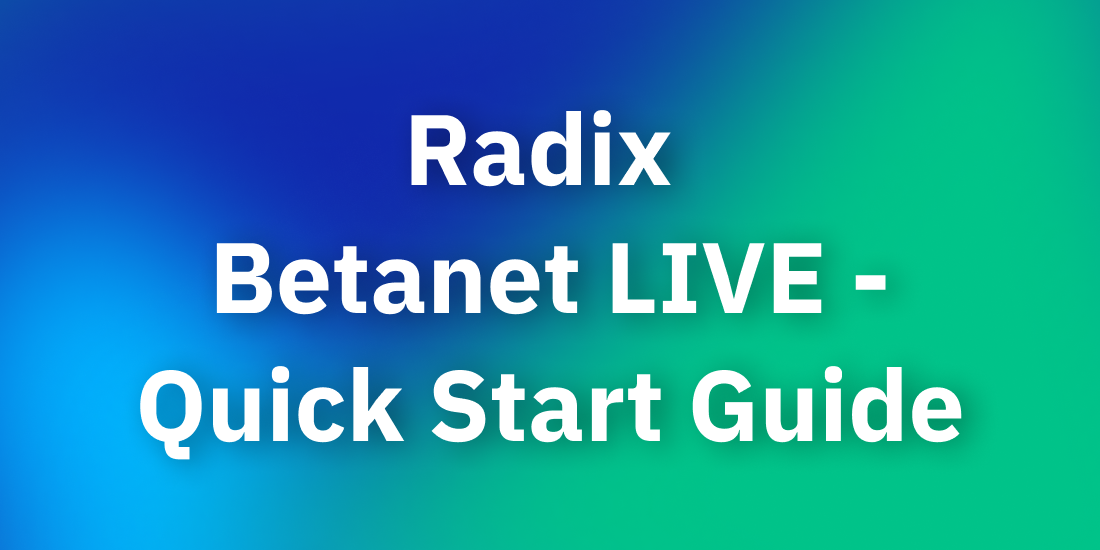 Before we get into the fun, it’s worth repeating a little background on what Betanet is and isn’t:

Betanet is a temporary test network, pure and simple. It is intended to provide a final, large-scale stress test of the protocol that will be offered to our community as the basis of the first version of the Radix public network (called Olympia).

Betanet is not the beginning of the official public Radix ledger or the official XRD token – that’s the Olympia mainnet. Unlike mainnet, the Radix team will have ultimate control of the betanet network, and we will be shutting it down shortly before the release of Olympia mainnet. That means that all assets stored on betanet will vanish. In other words, all tokens and transactions on betanet are just playing with “funny money” and nothing will be carried over to the main network (where everything will be forever immutable).

So basically betanet gives us a couple of months of real-world network operation and bug smashing – and gives our community the chance to get familiar with all of the ways that you will be able to participate on the mainnet to come.

How do I get started?

We’ve got first versions of four betanet widgets for the community to play with.

We’ve got a betanet version of the Radix Desktop Wallet for you to try. You’ll be able to create accounts, get free betanet test tokens, send them to your friends, and generally have a grand old time. A little later in betanet, we’ll even be enabling staking in the wallet so you can see what it will be like to delegate stake to validator nodes. Attaching messages and connecting a hardware wallet are also coming, so stay tuned.

Head over to betanet-explorer.radixdlt.com where you’ll be able to look up information on individual addresses and transactions. A little later in betanet, you’ll be able to view the current betanet tester validator set (which we expect to fill out as our community testers come online).

For a little more detail about using the betanet explorer, click here.

This one’s for the more hard core. If you want to get a feel for participating in Radix network infrastructure, you can run the latest version of the betanet Radix Node. We’ve already selected our closed group of validator node testers, but you can still run and connect a node to the network as a full node (90% of the experience of running a validator node) or archive node (create your own Radix API endpoint).

If you’ve got some experience with server systems administration or cloud infrastructure, dive into an early form of the Radix Node documentation at docs.radixdlt.com.

Also for the technically inclined, the Radix Node API provides a way to programmatically get basic information about on-ledger stuff, and control accounts and tokens. The betanet wallet connects to the API endpoint Radix is providing, and developers can also use this to get a feel for what an integration of a wallet, exchange, explorer, or other client might look like, using our JSON-RPC interface.

Click here for our preliminary Node API documentation at docs.radixdlt.com.

I want more, more I say!

You are truly an insatiable tester!

For more information, our betanet FAQ (on our shiny new website!) is a great place to start.

And certainly you should join the conversation on the Radix Discord. We’ve created a #betanet-discussion channel for like-minded testers like yourself, and the #bug-reports channel is absolutely where you should go if your testing turns up any issues of concern. We can’t promise we’ll directly answer every question and report, but rest assured our dev team will be monitoring these chats.

We’ll see you there!