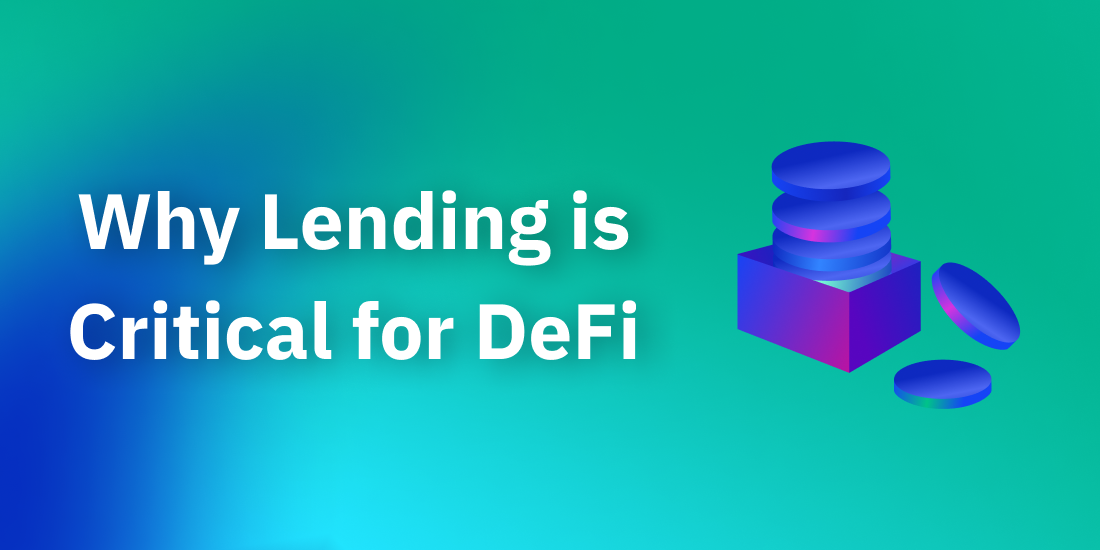 We here at Radix think DeFi is crypto’s killer app, and that lending is one of DeFi’s killer products - capable of propelling DeFi into the mainstream.

Why Lending in DeFi Offers Such Great Yield

DeFi provides inherent advantages over traditional finance in a number of respects.

Furthermore, DeFi allows for algorithmic optimization of capital and risk allocation through transparent and trusted data, instantaneous transfers of liquidity, and the full powers of abstraction and fractionalization offered by tokens and smart contracts.

These advantages can be passed straight to lenders in the form of yield -  20% annualized interest rates are not uncommon, but partly this is due to borrowers being charged higher than traditional interest as lenders need to be compensated for smart contract risk - which could wipe out holdings through bugs and exploits. Even if these yields decline as those bugs and exploits become less commonplace, DeFi is likely to still offer significant yield advantages compared to traditional finance.

As yield is so high, even on a risk-adjusted basis, capital will continue to flow from traditional finance into DeFi products. We’ve already seen the total value locked in DeFi smart contracts grow from $1bn in June 2020 to over $65bn by June 2021 (DeFi Pulse).

While this growth is to an extent due to the explosive rise in cryptoasset prices over that same period, it is their ability to achieve yield that we think will lead to a virtuous cycle of increased investment, value, adoption, innovation, and ultimately, trust.

So what are the key products today?

Overcollateralized variable rate lending protocols are the largest segment within DeFi lending today - including protocols such as Aave, Compound, and CREAM.

They work by allowing lenders to deposit cryptoassets into a pool of liquidity in exchange for an interest rate, or yield. Borrowers can then borrow from that pool so long as they post more collateral than the value of their loan - this is what overcollateralized means. The interest rate paid by borrowers to lenders varies in real time, and is a function of the ratio of the total amount being lent and borrowed.

For example, if you want to borrow 1 ETH, you must post more than 1 ETH as collateral. This is used to protect lenders from the risk that the borrower defaults on their loan, and can be liquidated by the protocol in case the value of the collateral falls below the amount borrowed.

But why would anyone want to borrow, if you must first have more than the amount borrowed?

The answer is that this creates liquidity for borrowers, who can unlock new opportunities for their cryptoassets without having to sell them. Borrowers can thus increase their leverage and take advantage of arbitrage opportunities elsewhere in the ecosystem - improving, in theory, the optimization of the entire ecosystem’s allocation of capital and risk. For example, if there were a highly lucrative but relatively unknown liquidity mining opportunity, the leverage enabled by lending protocols would allow those with high conviction to add more liquidity to the liquidity mining pool than their unleveraged asset base would ordinarily allow.

For lenders, this is also a win-win - you can get high yield without risk of default, as every position is overcollateralized, while still maintaining exposure to the potential upside of your lent asset.

While variable interest rates can offer better returns, they also come with their own perils. Would you really want to monitor interest rates every day to avoid potential liquidation risk under extreme events, such as with the BAT token? How can you effectively plan if you don’t know what your interest payments or yield will be?

While the likes of Aave and Compound are working on fixed rate solutions, a new family of protocols have emerged to solve precisely this problem, including Notional, BarnBridge and Opium.

These protocols borrow ideas from traditional finance - creating algorithmic derivatives from the liquidity of the underlying rates offered on the likes of Aave and Compound, and slice those rates into tranches of fixed interest rates, maturities, and risk levels - much like Collateralized Debt Obligations.

High risk tranches offer the best rate but are the first to be liquidated if there is significant movement in asset price or rate. Lower risk tranches offer lower rates, but are protected by the liquidation of higher risk tranches. For those that are truly risk averse, instruments can be structured that would allow for these risks to be hedged even further, including insurance on smart contract exploits (such as the tranches built into Saffron), to produce far less risky products that still generate yield in excess of that offered in traditional finance.

Other approaches include replicating bond-like instruments, such as that employed by the Hifi protocol; or the Anchor protocol from Terra, which creates fixed rates from the yield derived from other proof of stake blockchains.

Where Will DeFi Lending Go Next?

We are still in the most nascent stages of the DeFi revolution - with much experimentation still to come. Some of these experiments include the use of non-standard collateral, such as Non-Fungible Tokens (NFTs), to allow for lending against assets as varied as in-game items (NFTfi); protocols to allow for lending against any cashflow generating asset such as royalty contracts in music, or unpaid invoices (Centrifuge), or even future Bitcoin mining revenues (BTCST).

Additionally, we can look to the traditional financial markets to get a flavor for where there are still gaps in the overall DeFi product offering - such as uncollateralized loans (Teller), corporate debt (Maple), and how DeFi ultimately starts interacting with the gargantuan mortgage and bond markets, part of a global debt market estimated at over $250 trillion.

There are still a plethora of issues to sort out before we see mainstream adoption, and wholesale movement of capital, to DeFi.

Existing platforms can’t scale - look at Ethereum, where prohibitive gas fees now make the platform less accessible, not more. Bugs and exploits plague the ecosystem and you can never really be sure that your assets are safe in an Ethereum smart contract. Regulatory certainty is still a question mark - see the demise of DeFi Money Markets as an example.

On the systemic side, widespread use of leverage may exacerbate crypto boom and busts. Moreover, replication of some of the financial instruments of 2008 could lead to similar risks within DeFi - although this was in part caused by the opaqueness of financial institutions - an issue that transparent and decentralized networks with publicly available ledgers and smart contracts should be better placed to avoid.

As a final thought, whilst this article has been about lending, no one product in DeFi exists in isolation. By its frictionless nature, there is blurring between all DeFi protocols, including lending, decentralized exchanges, derivative and synthetic assets, stablecoins, liquidity aggregators, yield optimizers, and insurance and risk; let alone product categories that have yet to be conceived. With transactions that can be composed atomically across the entire ecosystem - either settling all together or not at all - the entire ecosystem effectively behaves as a single product. That is truly the magic of DeFi - unparalleled levels of interoperability.

Radix is the first layer 1 protocol specifically built to serve DeFi, and our team have spent eight years solving the problems of scaling, DeFi bugs and exploits, and cross-shard atomic composability. The Radix mainnet is launching in three days.