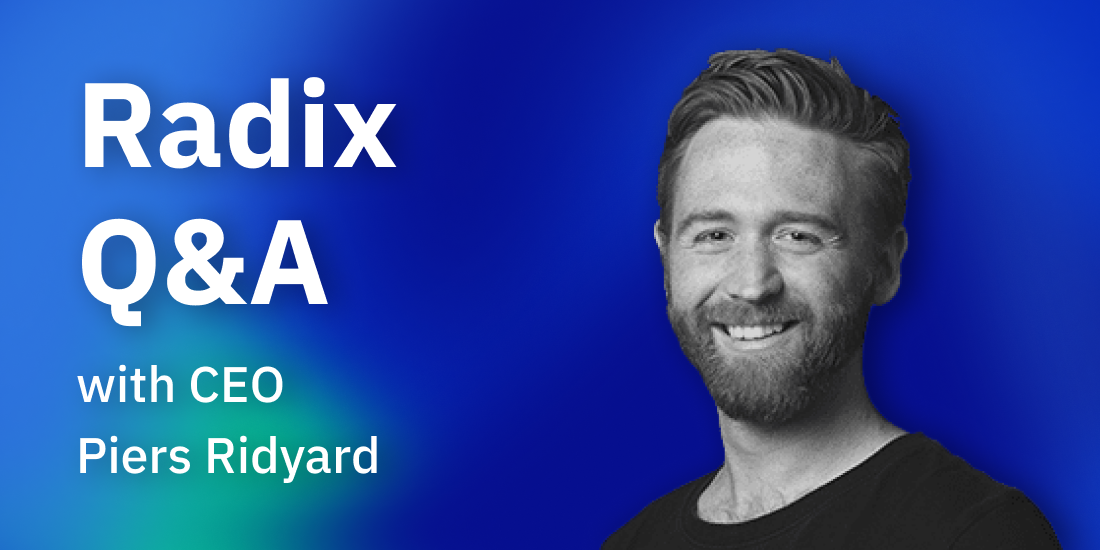 The CEO of Radix DLT, Piers Ridyard, recently conducted a Q&A with one of the leading Chinese crypto communities, Crypto Bureau. Piers covered a range of topics including; how Radix will solve recent security issues in DeFi protocols, the difference between Layer 1 Protocols, the differences between Cerberus and other consensus algorithms, and the Radix Developer royalty system.

This interview was coordinated by the Radix community and conducted in Mandarin, as such we have included the Mandarin and English versions.

For those new to Radix DLT, can you give us a brief introduction?

Radix is the Smart Money Protocol, a next-generation layer 1 platform that does not have the limitations of current layer 1 platforms. Radix has demonstrated 1.4 million TPS in 2018. This is the world record still today. Our new consensus algorithm ‘Cerberus’ is able to theoretically scale infinitely. We will deliver this capability in 3 steps: from 50 TPS to thousands of TPS, to unlimited TPS. We have a strong team with backgrounds at ConsenSys, Microsoft, Nvidia and Y-Combinator who are experienced in delivering complex products. All of our last milestones were delivered ahead of time.

A big focus for us is developers. With Radix, developers can build fast without the massive security and exploit risks on Ethereum. Some information around this is already public, such as the Component Catalogue and Blueprints. We are excited to share more information soon. Also, we think that we are incentivizing the right people in our network, the developers for creating valuable components and the validators for securing the network. Scalability is important of course, on Radix dApps can scale to millions of users without friction because we don’t have a built-in TPS limit thanks to our innovative technology.

At Radix we have big goals, we want to fundamentally change the current financial system because we think it is not a fair system. It is time to build a new financial system and Radix wants to be the platform on which the new decentralized financial system is built. To help with this, Radix has founded the GoodFi Alliance (GoodFi.com). The goal is to bundle the industry’s resources to educate and onboard the next 100 million people from the traditional financial system to DeFi. Many big players have joined us, like Aave, Chainlink, mStable and dozens of others. We are very thankful and are confidently looking into the future. We have 3 major milestones coming up with our Cassandra research network, our Betanet at the end of April and our mainnet by end of Q2. Exciting times at Radix!

Achieving global scalability while maintaining security and decentralisation is known as the "impossible triangle of the blockchain".

Radix claims to have solved this problem while maintaining the composability of the entire platform.

How have you done it?

To achieve (practically) unlimited scalability Radix employs sharding of their network with 2^256 shards, which is roughly comparable to the total number of atoms in the known universe. Each of these 2^256 shards can process around 3000 TPS independently.

Radix’s cross-shard consensus algorithm Cerberus ensures atomic composability for these transactions across the entire platform. Cerberus is highly parallelized, atomic and asynchronous which enables fast and atomic cross-shard transactions at a global scale.

Cerberus dynamically braids the involved shards of a cross-shard transaction together and the whole transaction either succeeds or fails together in an atomic way.

Radix is positioned to build a Layer 1 platform for decentralised finance. Compared with other Layer 1 platforms on the market such as Near, what are some of the differences and advantages of the Radix method of sharding?

The unique advantage of Radix’s sharding approach is that it is the only one that does not break atomic composability while achieving linear scalability. All other competing sharded layer 1 platforms sacrifice composability to get some scalability via sharding, which is not sustainable.

Near’s scalability is limited because it requires too many nodes (1 million nodes are needed for only a total of 10K TPS) and also breaks atomic composability.

Polkadot introduces sharding with parachains, but breaks atomic composability between parachains/shards, because a smart contract can only send messages to another parachain and Polkadot doesn’t support the concept of atomic cross-shard transactions.

Elrond has shards, but their metachain will become a bottleneck in the future because every cross-shard transaction needs to be initialised and finalised on their metachain and also Elrond does not support atomic composability across shards.

Cosmos has shards, but dapps are separated on side-chains which breaks atomic composability between them.

Avalanche, Cardano, Fantom, Solana, Algorand and Ethereum 2.0 are not sharded in the first place and therefore will run into bottlenecks sooner or later.

Without sharding, there is an upper limit for the transactions per second, because every single node needs to process every transaction at least once and additionally there are storage issues since the ledger state grows over time to a point where you either can’t handle it anymore on a single node or you need a supercomputer which leads to centralisation.

Even if Radix's network can support dapp operations effectively, why would dapps on other chains (such as Ethereum) migrate to Radix?

Radix believes in enabling developers to build fast without breaking things. This is not what is happening today. Every month millions of dollars of user funds are being stolen/hacked/lost, and developers are spending 90% of their time debugging and security testing rather than building. This is the legacy of Solidity based development

Fundamentally decentralized finance is dealing with people’s money. When you are dealing with people’s money it is really important that the system is secure. The Radix development environment, Scrypto, allows the developer to create programmable state machines (the same secure systems that are used in traffic light controls or nuclear power stations) that are much safer and faster than Turing based solidity smart contracts.

These finite state machines are pushed onto the Radix ledger as “Components” and can be used to create anything from simple tokens to full decentralized autonomous lending markets like Aave or Compound.

Once a component has been created, it can be re-used by any developer, shortcutting development time from weeks to hours, and creating an ever-growing library of secure financial building blocks. This moves from every developer needing to deploy huge smart contracts, to developers only needing to develop the small pieces of extra functionality that make their project special. This is already how most professional software development is done – open-source libraries form the bedrock of most commercial applications today!

Lastly, we firmly believe that the financial system of the future should reward those that make it better. Every time a component is re-used by a developer, the Radix component system allows a royalty to flow to the developer that originally created that component, making sure that components are more than just a great system for building dApps quickly: it is also an entire system of royalties that rewards great developers for their hard work in improving an ecosystem.

How does Radix make the defi dapp on Ethereum migrate to the Radix network?

Gas costs are killing the usability of the Ethereum ledger. Solidity is a nightmare for DeFi developers. Right now, most of the Ethereum ecosystem is actively looking for ways to mitigate the scalability issues, and every single project is constantly trying to mitigate the security issues of solidity. Layer 2s break the composability that is so critical to DeFi, and projects like Polkadot, Avalanche and Ethereum 2.0 do no better on this front.

To ease the transition from Solidity to Scrypto, one of our partners, Noether, is creating a system that allows people to migrate their Solidity code across to the Radix network: https://www.radixdlt.com/post/object-computing-and-noether-dlt-develop-ethereum-based-smart-contract-platform-for-the-radix-ledger/

In addition to this, Radix recently launched the GoodFi initiative with some of the leaders in the DeFi space to help bring 100m users into DeFi by 2025: https://www.radixdlt.com/post/radix-launches-goodfi-alliance-with-chainlink-aave-messari-mstable-more/

Will the Ethereum node be built to be compatible with EVM, solidity, ERC20 asset cross-chain operations?

We are building a number of bridges between the Ethereum and Radix ecosystem, including supporting the renVM for decentralized bridging services, and services such as Copper to bring many more assets across to the Radix ecosystem from Ethereum ERC20s and beyond.

Radix mentioned in the white paper that Radix proposed a new consensus mechanism Cerberus. Can you explain to you what is the difference between Radix's "Cerberus" and others?

To explain – let’s say that there is a transaction that touches three shards in the network (as the shard space is SO large, all transactions will always touch at least two shards). Because all transactions are deterministic, the submitting node can see which three shards the transaction is touching. Because validators are deterministically mapped to the shard space and must report what shards they are servicing as part of their staking process, the submitting node also knows ALL the validators that are involved for the transaction to be confirmed.

This is how Cerberus ensures atomicity between shards for complex transactions like flash loans or other DeFi native operations.

Crucially – as this is NOT a blockchain, any other transactions that also touch these validators do not have to wait for this consensus operation to be finished. Validators can process hundreds or thousands of consensus events in parallel, meaning that these cross-shard operations do not intrinsically slow down the network as a whole.

We have seen the introduction of the developer royalty system function in the Radix network.

How does the system work? What problems does it solve?

After the explosion of DeFi, security vulnerabilities have attracted much attention.

Radix claims to reduce hacker attacks and vulnerabilities on DeFi. What technology is this based on?

The main difference is that in a FSM you are explicitly defining states with transitions between them and most importantly these states are finite. On the other hand, Turing complete based smart contracts like Ethereum’s Solidity have an infinite amount of states which is obviously much more prone to errors and exploits.

The last question is believed to be of concern to the audience. As the platform token in the Radix project, eXRD, please introduce the economic model of the token. Where else can we obtain eXRD tokens?

The eXRD token will be swapped 1:1 for the Mainnet token XRD. XRD has a fixed supply, and thanks to Proof of Stake around 50% of the tokens are expected to be staked and out of circulation. While you stake XRD you will still be able to have the capital liquid and available for you, this is possible via Stakehound’s Liquid Staking. Stakehound is a very promising project incubated by Radix. Various DeFi use cases will also lock up some of the remaining circulating tokens.

For our Mandarin-speaking community!